U.S. equities are threatening to break up and out of a multi-month consolidation range with the Dow Jones Industrial Average testing its April high alongside the psychologically important 25,000 level.
Investors have a lot of positives to be encouraged by, including a cooling of long-term interest rate increases, a calming of geopolitical tensions and ongoing labor market strength. Moreover, a calming of inflationary pressures is easing worries about an aggressive pace of Federal Reserve rate hikes this year.

Investors are piling into highly leveraged turnaround plays. Especially in the energy sector. But key technology plays look ready to surge as well, in areas left for dead like electric vehicle charging. Here are five to watch: 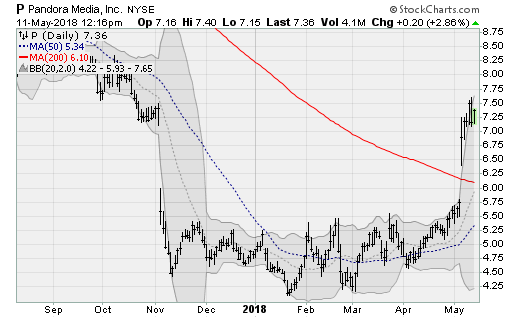 Pandora (NYSE:P) shares have blasted out of a long consolidation range — which ran between November and April — and hopes of an emerging turnaround for the internet streaming music pioneer.
New management has managed to engineer an increase in paid subscriptions and stabilize user metrics. Analysts at B. Riley FBR upgraded shares to “buy” on what they see as meaningful business improvements and an attractive valuation.
The company will next report results on July 31 after the close.
Analysts are looking for a loss of 16 cents per share on revenues of $372.50 million. When the company last reported on May 3, a loss of 27 cents per share beat estimates by eight cents on a 1% rise in revenues. 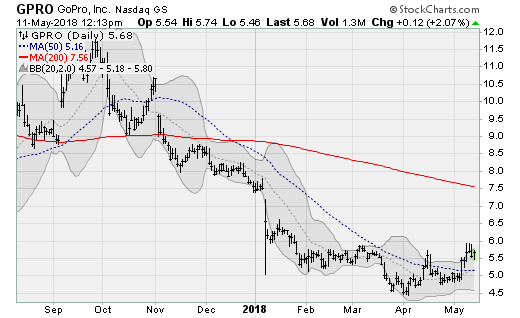 GoPro (NASDAQ:GPRO) shares are rounding higher and could be ready to break free from a five-month consolidation range.
Watch for a possible test of the 200-day moving average last touched in November — which would be worth a 36%+ gain from here. Shares have been bolstered by an increase in takeover speculation as well.

The company will next report results on August 2 after the close. Analysts are looking for a loss of 21 cents per share on revenues of $270.6 million. When the company last reported on May 3, a loss of 34 cents per share beat estimates by two cents on a 7.4% decline in revenues. 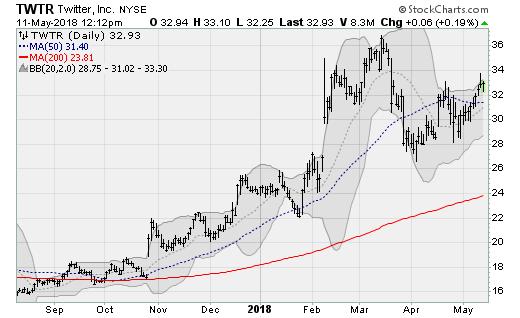 Twitter (NYSE:TWTR) shares look ready to resume the upward march that started late last summer, more than doubling off of its September low into the high set in March.
A profit-taking pullback ensued, but the bulls are on the charge again pushing shares up and over their 50-day moving average. Aegis analysts highlighted in a recent note to clients that both Walt Disney Co (NYSE:DIS) and Viacom (NASDAQ:VIAB) have announced partnerships to deliver content — including live and unique programming — on the platform.
The company will next report results on July 26 before the bell. Analysts are looking for earnings of 16 cents per share on revenues of $696.4 million. When the company last reported on April 25, earnings of 16 cents per share beat estimates by five cents on a 21.3% rise in revenues. 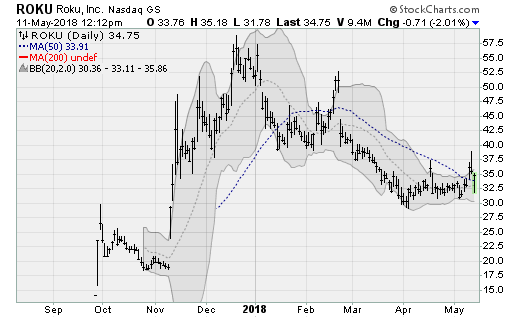 Roku Inc. (NASDAQ:ROKU) shares look ready to recover from a five-month downtrend with a break above its 50-day moving average. The decline reversed roughly half of the post-IPO rally, setting up a good entry point for value-focused investors.
Management continues to execute well and expand its streaming TV user base with a shift from set-top boxes to built-in smart TV functionality.

The company will next report results on Aug. 8 after the close. Analysts are looking for a loss of 13 cents per share on revenues of $141.6 million. When the company last reported on May 9, a loss of seven cents per share beat estimates by nine cents on a 36.5% rise in revenues. 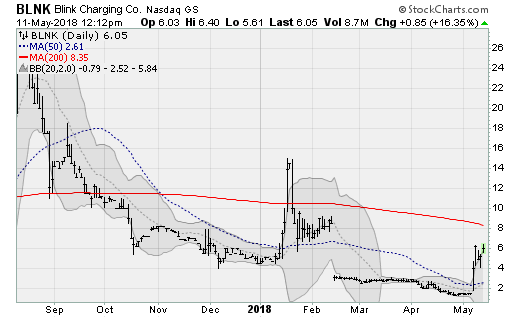 The steady decline in energy prices and some lost momentum in the shift towards electric vehicles has been a steady weight on Blink Charging Co (NYSE:BLNK) share price which has fallen from a high of $44.50 in 2016 to a low of just $1.28 in April.

But shares have jumped more than 300% this week as Trump’s decision to exit the Iran nuclear deal raised concerns about higher energy prices on supply disruption concerns.

With gasoline prices rising above $4-a-gallon in California this week, consumers could soon reconsider a shift towards battery-powered cars as a way to avoid higher energy prices.

Facebook is "very serious" about launching its own cryptocurrency, according to a report from Cheddar. It's not the first time...