The stock market’s poor start to December halted in its tracks the kind of euphoric rally that has marked the end of past bull markets, a so-called blow-off top.

Between mid-August and late November, the Dow Jones Industrial Average was up 10.5% in a 74-day sprint that seemed to be immune from negative headlines.

According to Ned Davis Research, the Dow has posted a median gain of 13.4% during blow-off tops dating to 1901. The median rally length was 61 days. 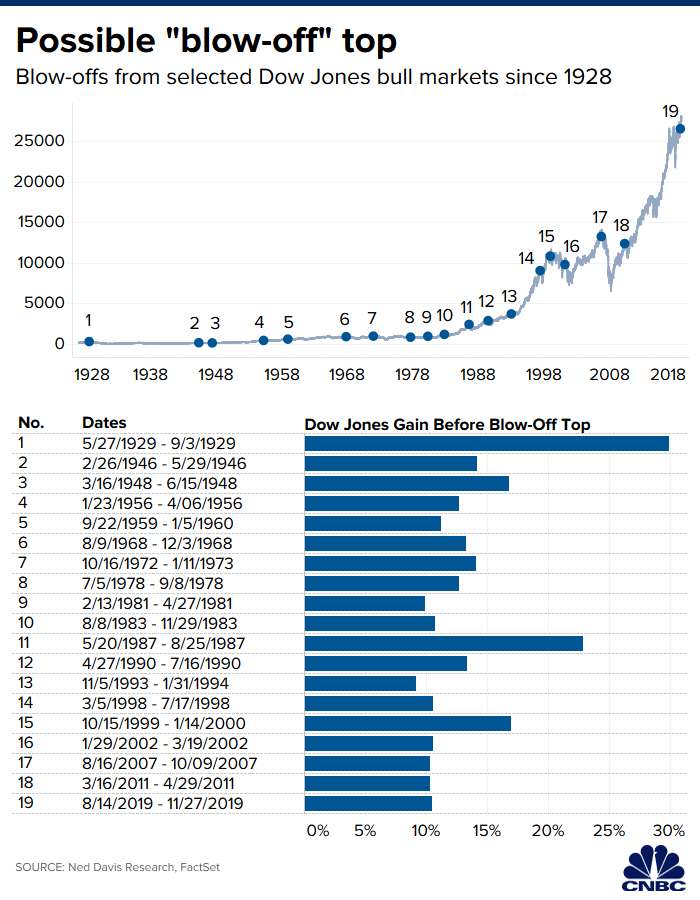 “Given the high valuations I see, plus these divergences between many different indices, I am aware that many bull markets have ended with a rally similar to what we have seen since August,” firm founder Ned Davis said in a note.

Stocks were on fire last month in large part because of easier monetary policy and expectations that China and the U.S. will strike a trade deal. The Federal Reserve cut rates twice since August and has signaled it will keep them at current levels for a while. Also, China and the U.S. have said they were closing in on a “phase one” trade agreement to be signed before year-end, although President Donald Trump suggested on Tuesday that an agreement may not come until after next November’s election. 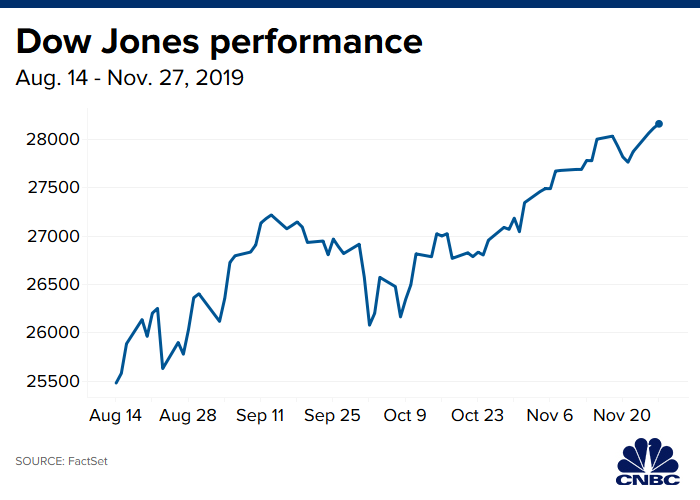 However, the fast rise in stocks gave some experts pause. Ed Yardeni, president of Yardeni Research, told CNBC last month the market was going up in a “melt-up fashion,” noting: “That’s actually the risk.”

Christopher Harvey, head of equity strategy at Wells Fargo Securities, also said in November the key catalysts that were driving the market higher had “played out.”

Stocks started off December on the wrong foot. The Dow dropped 548.6 points in the first two trading days of the month amid renewed worries around U.S.-China trade relations. Trump’s comment on Tuesday, coupled with negative trade rhetoric out of China, sent stocks tumbling.

To be sure, the market’s rocky start to the final month of 2019 could be just a byproduct of investors taking some profits after a big run. Even after the Dow’s declines, the 30-stock average remains up nearly 20% for the year and within striking distance of its all-time high. Most Wall Street strategists expect the bull market to continue next year.

“A pause after a two-month rally shouldn’t be surprising,” said Willie Delwiche, investment strategist at Baird. “And it shouldn’t preclude from strength over the latter half of December, which is when we tend to see seasonal strength for the month.”

U.S. stock index futures rallied early Wednesday morning, boosted by a news report from Bloomberg that said the U.S. and...