U.S. equity futures were in the green in premarket trading Tuesday as investors weighed the impact of the escalating trade war between the United States and China.

Major U.S. indexes tumbled Monday after news that China plans to raise tariffs on $60 billion worth of U.S. imports, beginning on June 1. The list of targeted goods ranges from TV cameras to tequila, and includes a range of agricultural products. Beijing’s move comes after Washington announced last week it would increase tariffs from 10% to 25% on a bulk of Chinese imports.

Will This Document Destroy Trump?

If you love America, you need to see this document.

Because what’s hinted at inside could unravel as soon as June 30th … And smear what’s left of Trump’s reputation.

The Dow and S&P 500 suffered their worst days since early January, and the Nasdaq Composite had its biggest single-day loss of the year.

In a note to clients Monday, Citi said its China economists are “cautiously optimistic that a trade deal can eventually be signed.” But added that the “window to avoid further escalations in US/China tensions is closing fast.”

“Ongoing trade flare-ups may continue to swing the stocks in the near-term, but we think the market may have priced a lot of this in,” Citi said.

President Donald Trump tweeted on Monday that China will be “hurt very badly if you don’t make a trade deal. ” He also said companies would be forced to leave the country without an agreement, adding that China had a “great deal” almost completed but they “backed out.” Stocks came off their lows in afternoon trading Monday after Trump said he had not decided if he would slap tariffs on the remainder of Chinese goods.

According to the Washington Post, the office of the U.S. Trade Representative has already gone ahead with first steps on slapping tariffs on roughly $300 billion of Chinese imports. Mike Wilson, Morgan Stanley’s chief U.S. equity strategist, told clients in a note Monday that higher U.S. tariffs on Chinese goods will likely turn into a a headwind for corporate earnings — and the economy could fall into a recession if the country’s trade war keeps escalating.

In the near-term, J.P. Morgan is preparing clients for the worst. The two sides have made progress and held a number of “constructive conversations” on structural issues and trade imbalances.

“However, the remaining hurdles are critical and difficult,” J.P Morgan said. “With the re-escalation of tariff war risks (and China vowed to retaliate), it is challenging to reach an agreement very soon.”

Stocks doing business in China got hit the hardest. Apple, Intel and Caterpillar have all stumbled more than 10% in the six trading days since Trump’s surprise tweet announcing the higher levies. 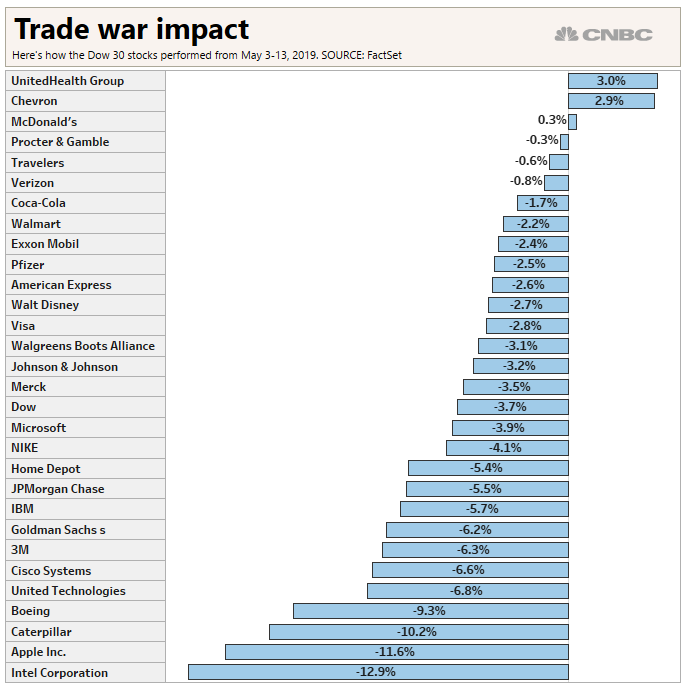 Speaking at a White House event on Monday evening, U.S. President Donald Trump offered a projection about how much longer...