Jeff Brown 4X Window is a free special presentation by Jeff Brown where he’ll reveal one tech subsector with some of the biggest profits on offer. His first recommendation of one of these stocks – what he calls “Penny IPOs” – gave readers the chance at gains of 432% in just 41 trading days. 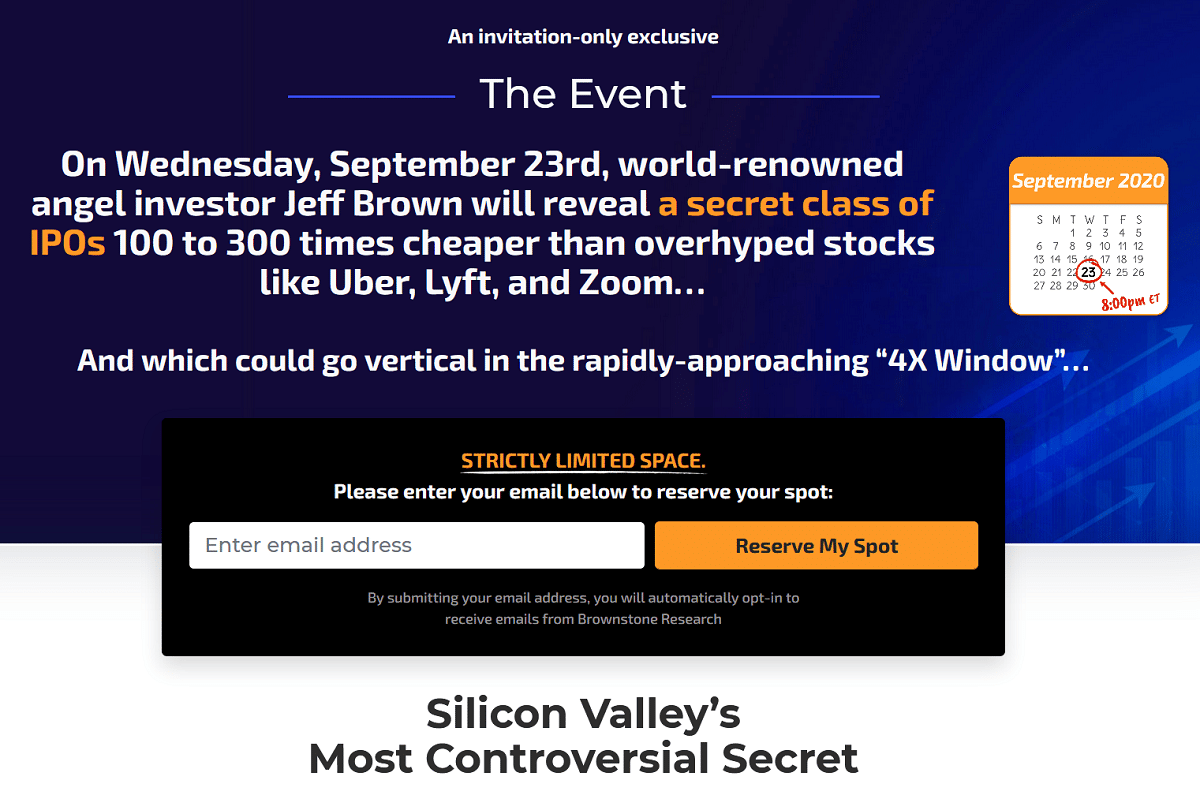 Folks who’ve been following us know one of the profit trends we’re most excited about is the rapid innovation underway in the tech sector.

That’s why today, we bring you insight from tech expert and Silicon Valley insider, Jeff Brown. Below, he shares two warning signs that a company isn’t worth your investment.

And on Wednesday, September 23, at 8 p.m. ET, he’s hosting a free special presentation to reveal one tech subsector with some of the biggest profits on offer. His first recommendation of one of these stocks – what he calls “Penny IPOs” – gave readers the chance at gains of 432% in just 41 trading days.

HOW TO TRADE STOCKS RIGHT NOW FOR AN EXTRA $1,000 A MONTH

GET FREE 3-day Video Trading Series Showing You How to Start Making an Extra $1,000 a Month.

I’m an optimist by nature.

As my longtime readers know, I believe we are on the verge of an age of abundance. The companies and technologies that drive this age will focus on trends like 5G wireless networks, precision medicine, artificial intelligence, cloud computing, quantum computing, and the next generation of clean energy production – nuclear fusion.

What does that mean? COVID-19 has ushered in a new economic environment. Companies whose products and services are well-positioned for this new environment are absolutely booming. And those that aren’t are suffering badly. The next two years will be brutal for companies that don’t adapt quickly.

This splintering will send a small segment of the tech world – one that was largely ignored until the pandemic – much higher.

The pandemic pulled forward some tech trends by 5-10 years. For example, we’ve been talking about teleworking for the last 20 years. But what happened?

Organizations and their management teams became even more centralized, and urban centers grew. Companies and managers were reluctant to have their workforces go remote. After all, managers felt they couldn’t control and manage their employees if they couldn’t “see” what they were doing all day long.

But now they’ve been forced to let employees work remotely. In March, estimates showed almost 6 out of every 10 Americans were working from home. And this trend will persist even after the pandemic passes.

For instance, Pinterest forked over nearly $90 million to break its contract on a San Francisco office complex. It won’t need the space in a remote work environment.

Or consider e-commerce. Earlier this year, many online retail categories showed a 74% increase in online orders immediately following the economic lockdowns. And now that consumers understand how convenient these services are, there will be no turning back.

Let’s consider one more example. Earlier this year, Nokia released data saying that most wireless networks around the world see 30-45% growth in traffic over a year. But peak usage jumped 20-40% over a period of just four weeks during the lockdowns.

These numbers are beyond crazy. And it’s all because people have been working and entertaining themselves from home. Videoconferencing traffic – for both work and socializing – spiked 300%. Gaming traffic exploded 400%… because kids were staying home from school.

To put this growth in context, network data traffic would more than double every 12 months if this persists. We’re talking about exponential growth. And it’s overwhelming networks all over the world.

But not all technology investments will be winners in the years ahead.

In fact, investing in some companies right now could actually be dangerous. Some tech stocks have reached absurd valuations. And these are going to crash hard.

So today, I’ll show you two warning signs to look for when considering whether to invest in a tech stock…

Our first warning sign concerns tech stocks that some consider “darlings.” They’ve been around for decades and seem to be safe, solid investments.

But we shouldn’t let brand recognition trick us into investing in companies whose best days are behind them. Just because we’re familiar with a company’s products or logo doesn’t mean it’s stayed on the bleeding edge of progress.

To be successful in the tech sector, companies must be innovative. Their product strategy and road map are critical. And they must be improving people’s lives.

At one point, every successful tech company was an innovator. But some companies have simply lost the touch. They got buried in their past success and fell prey to unnecessary processes and groupthink.

Some Silicon Valley “old guards” are trying to profit off their reputations from 20 or even 40 years ago… But they will be a black hole for investments.

These companies may even look like good “value” plays right now. But they are dangerous investments.

In other words, there are far better places for you to put your money.

Our second warning sign is “hype.” Whenever we see news headlines blazing and hear chatter on social media, we should be careful to not get swept up in the current of excitement.

While public enthusiasm doesn’t disqualify a stock from being a good recommendation, many stocks either don’t deserve the attention they’ve received or have gotten so much attention that their numbers no longer make sense.

Right now, I see a lot of tech stocks trading at insanely high valuations… Valuations so high that even if these companies meet their aggressive growth assumptions, the stocks won’t rise much over the next five years. This future growth is already priced in. And if these companies see even one misstep or market downturn, the stocks will plummet.

Understanding a company’s valuation is the most important part of any investment. Even the best companies with technology none of their competitors have are not good investments if they’re trading at too high a valuation. Investing at an irrationally high valuation in a fantastic company will still lead to investment losses.

We can see the dangers of investing in overvalued technology companies by looking back at the dot-com bust of the late 1990s and early 2000s. Back then, companies were going public at absurd valuations with little more than a vague business plan and a “dot-com” in their name.

The founder and former CEO of Sun Microsystems, Scott McNealy, put it best. In an interview in 2000, he said: 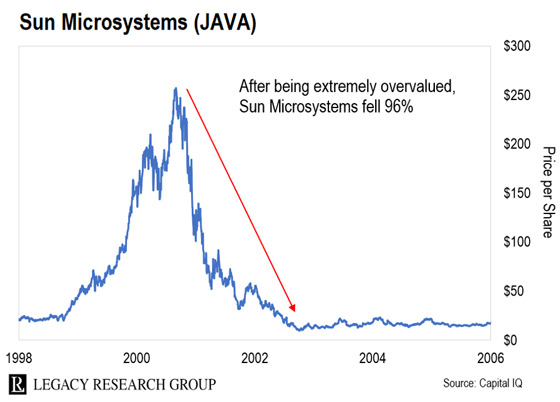 Sun Microsystems’ fall didn’t happen because the company had bad technology. In fact, its Java programming language is still in use today. It fell because the valuation was way too high to support its future growth expectations.

I want to be very clear about one thing. I’m not suggesting that the technology market is poised for a broad collapse like we saw in the dot-com era.

Broadly speaking, many technology companies are much healthier than they were in the late ’90s. And the tech companies in the model portfolios of my research services are some of the best companies to own.

I retell this story to simply point out the dangers of investing in a company with an absurdly high valuation.

McNealy said an enterprise-value-to-sales (EV/sales) ratio of 10 was crazy high. I disagree with him on that. Some companies can justify an EV/sales ratio of 10 as long as they have the gross margins and growth rate to support it.

But now we see some large companies trading at an EV/sales ratio of 90! That’s an absurd valuation… and investors could lose most of their money if they hold on to these companies.

I want all my readers to be on the right side of market history.

It’s been my mission to help my readers avoid pitfalls like these overhyped, overvalued stocks… and find life-changing gains with companies that have the potential to become the next Amazon.

If you’re interested in learning more about a subset of small tech stocks that can spike hundreds or sometimes thousands of percent in just days, then I invite you to join me on September 23 at 8 p.m. ET. I’ve put together an urgent presentation that technology investors won’t want to miss.

In it, I’ll explain what these small tech stocks are, the reason they can be so explosive, and why we’re approaching a unique period that will send them into overdrive…

Teeka Tiwari's Set For Life Summit is coming in September. When we meet together on Wednesday, September 9, at 8:00...