The results of last year’s Trump tax cut are starting to roll in, and they should not be surprising to students of the Laffer Curve or readers of this blog. As I noted last October, not cutting taxes rates is boosting the deficit:

Since early last year (February 2016, to be exact), when talk of tax cuts began to spread and politicians on both sides of the aisle began to agree that our corporate tax rate – the highest in the developing world – should be cut, revenues from corporate and individual income taxes have flatlined, despite the fact that personal incomes have increased by almost 5%, trailing earnings per share have increased 8%, and the stock market has jumped some 30%.

Indeed, there was zero growth in federal revenues beginning in February 2016 through the end of last year. Further, as I predicted back then, “if the tax code is reformed, and marginal tax rates on incomes, capital gains, and corporate profits are reduced, Treasury will see an almost immediate surge in revenue.” And it is happening.

Thursday’s April Treasury report showed that April tax receipts not only set an all-time record, but were fully 12% higher than last April’s receipts. People and corporations had been postponing income and accelerating deductions for the 22 months leading up to last December’s landmark tax reform, and now they are beginning to realize that income and stop postponing deductions. Tax receipts are once again growing, and there is every reason to expect more of this for the foreseeable future. 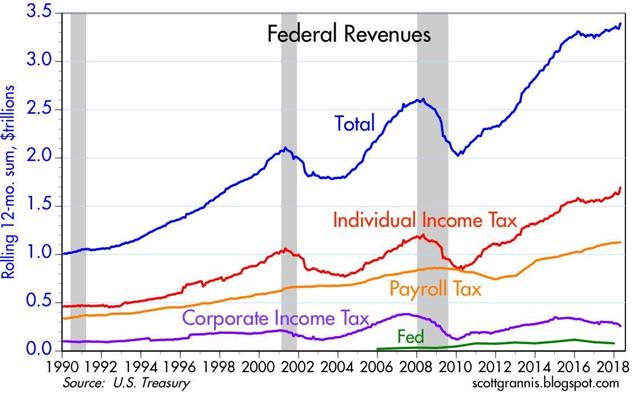 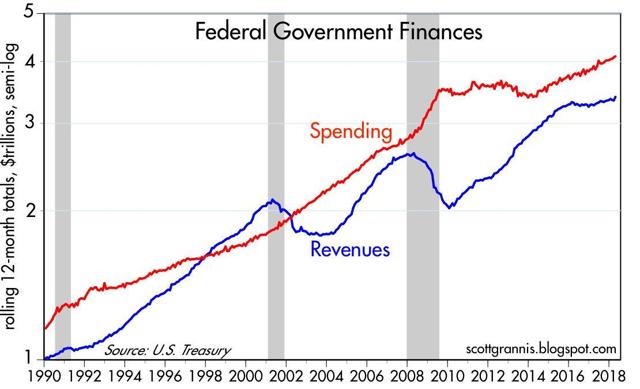 As Chart #2 shows, spending has been rising at a fairly constant rate (about 4% per year) since 2015. On a rolling 12-month basis, federal revenue has risen at a 3.4% rate over what it was a year ago, and it could easily be recording 5-6% rates of growth going forward. With just the tiniest bit of spending restraint, we could see the budget deficit hold steady or decline between now and year end. 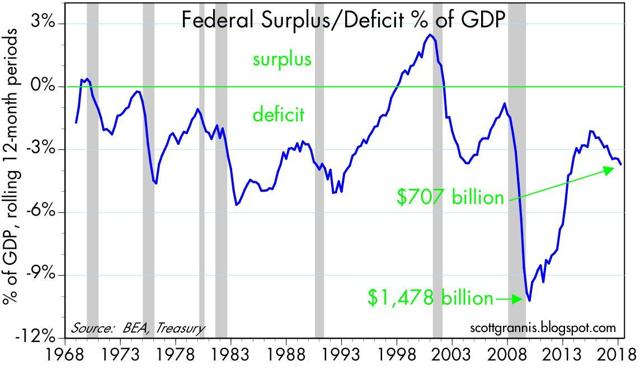 As Chart #3 shows, the federal government’s finances are very dependent on the health of the economy. They always deteriorate during and after recessions, and they almost always improve during periods of growth. The recent increase in the budget deficit is anomalous in that regard. But when seen through the lens of the Laffer Curve, it is understandable and thus likely temporary.

The Laffer Curve can be summed up as follows: people respond to incentives, especially changes in tax rates. When there is talk of a future reduction in tax rates, it is reasonable to expect tax revenues to decline in anticipation, and then subsequently rise once the rates have been cut. Business investment was weak in anticipation of a reduced business tax rate, and now it should be stronger, with the result being more jobs, more income, more profits, and more revenues to Treasury.

The one thing to worry about is the spending side. Spending discipline unfortunately is lacking in today’s Congress, and the unchecked growth of entitlements promises to wreak havoc with federal finances in coming years.

How to Create a Winning Portfolio From Top-Ranked Industries

Trump’s latest announcement of pulling out United States from the Obama-era Iran deal and reimposing powerful sanctions on the OPEC...