With a solid U.S economy, Americans are stocking their shelves with the brand names they know and love rather than bargain products.

But not all these stocks are loved. In fact, some analysts right now are using every opportunity to knock down one consumer staples stock in particular that has had some struggles lately.

And they’re completely overlooking the work of an activist investor who’s leading a complete turnaround for the company.

But his plan should soon pay off… which means there’s only a short period of time you can jump into this stock while it’s still hated!

Whether you’re already retired or still building your nest egg — reports that the economy grew by 3.2% should be welcome news. Yet 36.5 million Americans face a retirement crisis on a scale we’ve never seen before. On May 21st at 8 p.m. Eastern, you’ll hear what you can do right now to make the most of “Trump’s Economy”… and why there’s no time to waste if you’re uneasy about your retirement.

Founded in 1869, Campbell Soup Co. (CPB) has built its brand into a full-blown empire for a century and a half.

But after several management missteps over the last few years, its stock was in distress.

That’s why Dan Loeb declared war on Campbell’s board of directors and demanded serious changes from the company.

Loeb is the founder of Third Point Capital, a hedge fund that has a knack for investing in underperforming companies and pushing them to do better.

In other words, he’s an activist investor, and one of the best, in fact.

This guy is serious about change for Campbell’s and has battled to get a board in place that will follow his vision.

The company has already yielded to some of his demands, including shaking up the board and installing a new CEO.

Next on Loeb’s wish list is for Campbell to tighten its extensive portfolio and focus on building its core brand.

In fact, CPB recently announced it would sell its fresh food business Bolthouse Farms for over $500 million.

And thanks to Loeb’s pressure and guidance, Campbell’s has beaten earnings estimates for the last two quarters…

But its new transformation strategy isn’t even close to over!

However, their sentiment has not held this stock back!

Author who called the 2008 crisis and Quantum Fund co-founder Jim Rogers have an urgent message for the American public.

Shares are up 17% since the beginning of the year… outpacing the 13% increase of XLP.

And with its fundamentals improving every quarter, this American brand is set to return back to glory. 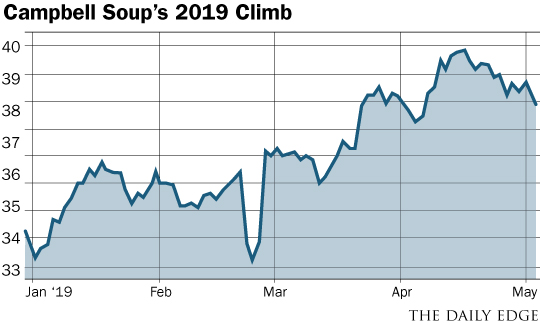 Looking at the chart, CPB has made a habit of giving back some gains. But it has also made consistently higher lows since the end of February.

Moreover, prices put in a double bottom around $33… which gives it a strong support level to lean on.

Campbell Soup has traded between $33 and $42 since last year. If it can break out of that range, the share price would target $52.

So before the changes really start to seep into CPB’s share price, consider adding this American brand to your portfolio.

Today is all about Warren Buffett. That's because over the weekend, Buffett's conglomerate, Berkshire Hathaway, held its annual shareholder meeting...