There were a few things helping today’s mood.

Stocks were trading higher at the open this morning.

But after a slow drop in the morning, the major indices were sitting at sessions lows around 11:00am ET.

After trading sideways during lunch, a rally in the afternoon helped stocks work their way back to opening levels. And by the end of the day, the major indices were trading near session highs.

But in spite of today’s gains, the S&P still has a ways to go in order to make up for yesterday’s losses. After 2 trading days of trading, the S&P is still down 1.7% for the week. 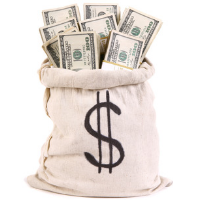 Get the details here while there’s still time.

After yesterdays beating, Apple (AAPL) struggled to get back above the $200 mark but finished with a 1.9% gain.

Take-Two Interactive (TTWO) was one of the biggest winners today. After reporting better than expected earnings the stock rallied 8.0%.

Disney (DIS) is taking a beating in after-hours trading. The stock is down more than 4.0% after reporting worse than expected earnings. In their earnings call, Disney said they will be bundling their 3 popular streaming services (Disney+ ESPN+ and Hulu) for $12.99 a month.

These Tech Stocks are Ready to Bounce