Stock index futures tanked on Friday morning, as investors feared President Donald Trump’s surprise threat of tariffs on all Mexico imports, amid a worsening trade war with China, could risk sending the U.S. economy into a recession.

Around 6:57 a.m. ET, Dow Jones Industrial Average futures indicated a drop of 258 points at the open. Futures on the S&P 500 were lower by 1.2%. Nasdaq futures dropped by 1.5%. The S&P 500 was already down 5.3% this month through Thursday after trade talks fell apart with China and rhetoric on both sides worsened in May.

“President Trump’s latest trade bombshell … might turn out to be a short-lived threat that is quickly defused by commitments on border security, but it nonetheless looks damaging at a number of levels,” Krishna Guha, head of global policy and central bank strategy at Evercore ISI, wrote in a note. “At the big picture level, it suggests that Trump trade policy might well mean a permanent state of endemic uncertainty and instability in the global trading system not simply a hard-headed sequential re-set of prior arrangements that started with Mexico and proceeds via China to Europe and Japan.”

Shares of GM dropped more than 5% in premarket trading. Ford lost 4%. Both have significant production in Mexico that could be subject to tariffs. Shares of railroads Kansas City Southern and Union Pacific also tanked.

The closely watched 10-year Treasury yield dropped to lows not seen since 2017. The U.S. benchmark was yielding 2.154% Friday morning. It was above 2.5% at the beginning of the month.

On Thursday evening, Trump announced the U.S. would impose a 5% tariff on all Mexican imports from June 10 until illegal immigration across the southern border was stopped.

The White House added in a statement that tariffs would be raised if the immigration issue persisted, with the charges set to increase even further if Mexico fails to take “dramatic action” to reduce or eliminate the problem.

Mexico is one of the U.S. largest trade partners. The U.S. imports every year billions of dollars worth of of chemicals, transportation equipment and other goods from Mexico. 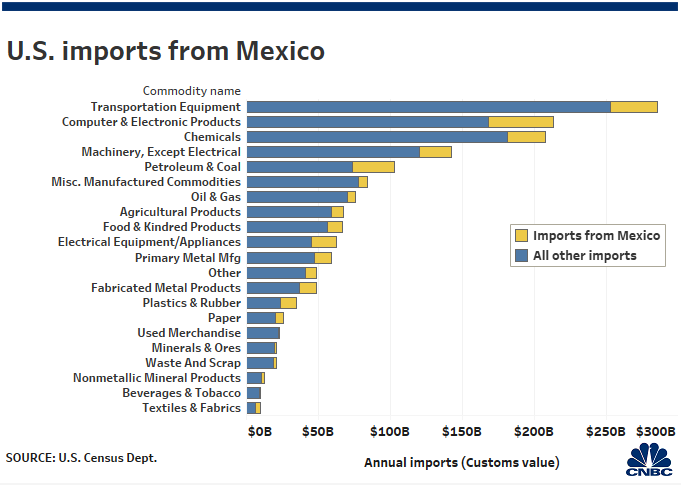 The biggest Chinese newspaper explicitly warned the U.S. on Wednesday that China would be prepared to cut off rare earth minerals as a countermeasure.

This Stock Pays a 6% Dividend… AND Has Price Appreciation Potential

By Jody Chudley, Financial Analyst When you buy a stock that yields over 6 percent, you generally aren’t expecting to...