The Federal Reserve is expected to conclude its December meeting on Wednesday afternoon by signaling it’s in no hurry to do anything to change its neutral stand on interest rates.

But Fed Chairman Jerome Powell is likely to promise the central bank will do whatever is necessary to keep liquidity high and overnight lending rates steady at the end of the year, a time when the short-term lending market is typically under the most pressure.

The Fed releases its post-meeting statement at 2 p.m. ET Wednesday, and it is not expected to make significant changes in its statement from its previous meeting. It will, however, release its interest rate forecast and latest economic projections at the same time, and it could show some improvement particularly after November’s increase in payrolls of 266,000.

Powell then speaks at 2:30 p.m., and he could be asked about the short-term lending market. 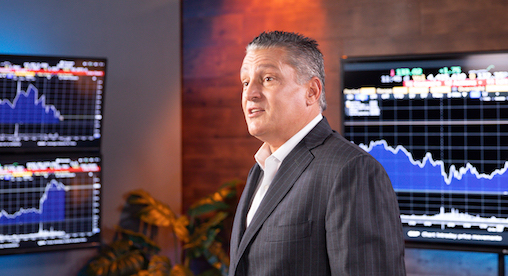 Hi, my name is Larry Benedict.

In basketball, we call it “leaving everything on the court…”

That’s what I’m going to be doing tonight…

My objective: to use my method—which has served me well over the years—to generate $70,000 or more in a single trading day.

If I win, all the money goes to a local charity.

If I lose, well, I fully expect to be heckled and shamed.

To reserve your seat online to watch the show…

“I think what I’m going to be looking for most carefully are probably changes in the forecast. Some of the numbers have been quite good,” said Drew Matus, chief market strategist at MetLife Investment Management. Matus said he expects the Fed to stay on hold for another year, so he sees no change in its messaging. “They’ll probably drop the rate for unemployment. We’re seeing them coming down and we’re not seeing a pickup in inflation.”

One of the hotter topics around the Fed has been the repo market. The Fed is conducting overnight and longer-term operations to keep the market operating smoothly. It is also conducting a quantitative easing-like operation to increase its holdings in Treasury bills, boosting the size of its balance sheet and adding to liquidity.

“They’ve been pretty flexible so far and [I] don’t see why that would change. I think a simple ‘whatever it takes’ tomorrow will be all he’ll really need to say about the issue,” J.P. Morgan chief U.S. economist Michael Feroli said in an email.

Feroli expects the Fed to repeat that uncertainties remain. Powell has been clear that trade issues are a potential negative and the world awaits Sunday’s deadline President Donald Trump set on potential new tariffs for China if there is no trade deal. “The Fed will monitor the data and assess the “appropriate path” of the funds rate; in other words, it will continue to convey no policy bias. We don’t expect any dissents,” Feroli said in a note.

The Fed could adjust its forecast for the fed funds rate when it releases its forecast, presented in a chart called the dot plot. The dot plot contains all the interest rate forecasts of Fed officials. The Fed cut rates for the third and final time in October, dropping the fed funds target range to 1.50% to 1.75%.

“We expect the median dot for 2020 will be lowered to the mid-point of the current target range, 1.625%. While there will likely still be some dots looking for a hike or two next year, we suspect the large majority of the Committee will be comfortable projecting no change for policy rates in the year ahead,” Feroli said.

Market pros have been waiting to hear what the Fed will say on the short-term lending market. Repo is a corner of the financial markets that is obscure to most people, but it has been in the spotlight since an unusual spike in rates in September.

It is extremely important since it is where institutions go when they need short-term cash. They typically exchange some collateral, like Treasurys or mortgage securities, for a short-term loan. It is considered the plumbing of Wall Street, and the worry is if it doesn’t work or if it shows stress, then it could lead to real trouble in the financial system.

Matus doesn’t expect the Fed to make any proclamations about the repo market Wednesday. “They’ll certainly be asked about it in the press conference,” Matus said. “He’s going to have some sort of answer. Whether this is sufficient to make people happy is a whole other question. I don’t think they want to put in place a solution that they’re not even sure they need on a permanent basis.”

He said open market operations appear to have the problem solved for now. “I think they’re not even really sure what’s happening. They made some changes to try to be more positive, to try to take some of the pressure off the market,” Matus said. “It’s not ‘if it’s not broken, don’t fix it.’ It’s more like ‘if you don’t know why it’s broken, don’t fix it.’”

The repo market faces pressures at quarter-end, since banks are under pressure to make their balance sheets appear safe, and even more so at year-end for regulatory purposes. That means they don’t want to show a tremendous amount of short-term liabilities on their balance sheets at quarter-end. Interest rates in the repo market have been slowly rising, as the year-end gets closer.

“If you want to lock up funding over year-end for December 31 to January 2, you would pay 4.20% for Treasury general collateral,” said Michael Schumacher, Wells Fargo director of rates strategy. “That price two weeks ago was 3%. It’s actually been moving up gradually. It seems to be ticking up fairly steadily.” He said last year that the rate rose as high as 5%, so that would be possible.

Schumacher said it would not be surprising to see the Fed add more funding to the market temporarily.

The rate spikes in September have been blamed on everything from corporations seeking short-term funds to pay taxes to changes in banking rules that hindered lending.

Major banks that are the primary dealers are the only institutions that can use the Fed facility, and they then would be lenders to other institutions that need capital. But they could also serve as a bottleneck since they are not required to report how the short-term funds are being used.

Oil gained more than 4% on Wednesday, as a larger-than-expected drop in U.S. inventories and hopes of deeper production cuts...