An update on manufacturing activity Friday could provide a much more useful picture of the economy than the October employment report, which is expected to be unusually weak due to the General Motors strike.

ISM manufacturing data is expected to show a contraction in activity in October, for the third month in a row. Manufacturing has been at the heart of the economy’s sluggishness, with a drop in business investment a big reason for the third quarter’s sluggish 1.9% growth pace.

Jobs, on the other hand, have been strong, as has the consumer, the biggest driver of the economy. Economists expect that just 75,000 jobs were created in October, and the unemployment rate is expected to tick up slightly to 3.6% from 3.5%, according to Dow Jones. Hourly earnings are expected to rise by 0.3%, or 3% year over year. The 8:30 a.m. ET report follows September’s surprisingly weak 136,000 payrolls.

“We already know the manufacturing sector is in recession for three reasons—trade tensions, the Boeing MAX, and the GM strike,” said Ward McCarthy, chief financial economist at Jefferies. The end of the GM strike “will take one of the nails out of the coffin.”

ISM Manufacturing data is due at 10 a.m. ET, and economists expect a reading of 49.1, better than the 47.8 in September. Any number below 50 represents declining activity, and ISM will also be muddied by slower activity due to the GM strike.

Jon Hill, BMO fixed income strategist, said regional Fed surveys have not been nearly as negative as ISM. “But of course we got Chicago PMI which was the weakest in three-and-a-half years,” Hill said. “We’re getting a lot of mixed messages on the manufacturing front. It’s not a question of whether it’s slowing. It’s just a question of how deeply it’s slowing.”

McCarthy said he expects ISM data to pick up next month with the end of the GM strike. “That should help the manufacturing over the next two or three months look better than the prior three months. Manufacturing won’t come out of recession until they start making the MAX again,” he said.

Some strategists say the market would respond if the ISM surprises to the upside.

“The jobs number will be big, but the ISM could be bigger. If that turns up, like Markit [PMI] suggested, that could be a big deal,” said Leuthold Group Chief Investment Strategist James Paulsen. 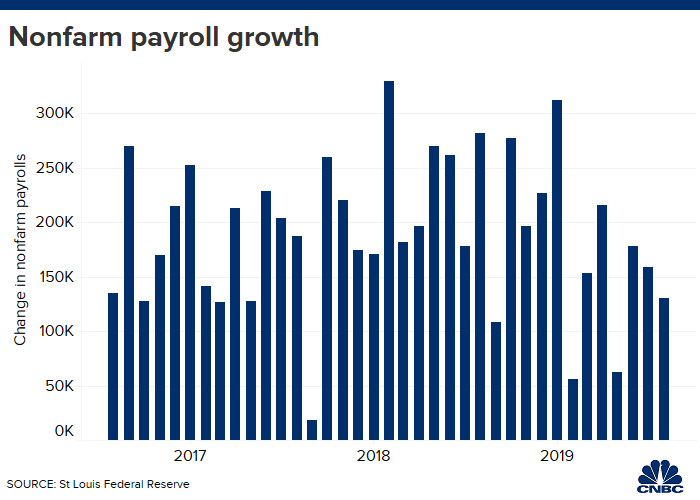 The manufacturing sector is dwarfed by the services sector, but economists have been monitoring services to make sure weakness is not spreading.

“At the end of the day, nonmanufacturing is way more important. It reflects the vast majority of the U.S. economy,” said Hill. ISM services data is released on Tuesday. “We’re a services economy. Until we see broad-based spillover on the services side, it makes sense for the Fed to stay on hold.”

As for the employment report, the government has reported that 46,000 GM workers were off the payrolls in October due to the strike, which has now ended. On top of that, workers at GM suppliers could also have been affected, and Refinitiv estimates a decline of 50,000 in manufacturing jobs alone.

“There will be a lot of focus on the payrolls. Negative 55,000 manufacturing jobs is a pretty stark number, even if it’s heavily distorted by the GM strike. The question is do you see spillover in the private sector side,” said Hill. “It depends where you see private sector services hiring.”

McCarthy said he expects to see 90,000 jobs. “There’s going to be some consequences along the supply chain as well,” he said.

Best Trading Advice > Investment Advisor > The jobs numbers are out today, but there’s another report that could be much more important

The stage appears to be set for stocks to shine after the Federal Reserve’s third rate cut and its signal...