U.S. Stocks Are as Healthy as Ever

The idea I’ll share today is a bit counter intuitive. But it’s important to understand.

It’s what has tripped up many investors after the big rally in stocks lately.

Some folks see the move we’ve had to start the year, and they assume the opportunity today is worse than it was a couple months ago. They assume the market can’t be in a better spot after a rally than it was before it began.

This thinking may seem to make sense… But it’s wrong.

It’s wrong because the measures of strength I track are actually looking better today than they were at the start of the year. And I’ll share one of them with you today.

That’s the counterintuitive part… that the market can get healthier as it rises. Once you understand this, it becomes clear that we still want to stay long U.S. stocks.

The ‘1%’ in America are going to hate this book Maryland farmer explains why the rich are really getting richer in America – while everyone else falls behind.

I can give you the simple conclusion up front: Stocks are healthier today – after a big rally – than they were at the start of the year.

You don’t have to take my word for it, though. I’ve got data to prove it. And one of my favorite indicators – the S&P 500 Equal Weight Index – explains what’s going on now.

In fact, this “early warning” indicator shows us that the market is even healthier after the major boom we’ve seen. Here’s why…

The Equal Weight Index gives us a deep understanding of what’s really going on in the market. It tells us if a market move is healthy or unsustainable.

Microsoft (MSFT) – the largest U.S. stock today – makes up nearly 4% of the index right now. Apple (AAPL) is more than 3%. Amazon (AMZN) and Alphabet (GOOGL) are nearly 3% as well.

The problem with this approach is the largest and most powerful companies control the S&P 500. If they’re soaring, the index can rise… even if lots of other companies are falling.

The Equal Weight Index solves this problem. It weights each holding equally (0.2%), regardless of size. And that means when it’s moving higher, we can see that a majority of stocks are surging… not just the largest companies.

The good news for our current boom is that lots of companies are participating. The Equal Weight Index broke above its long-term moving average this month. That means the trend is back in our favor. But the full story is even better.

That’s because the Equal Weight Index is actually outperforming the overall market. Take a look… 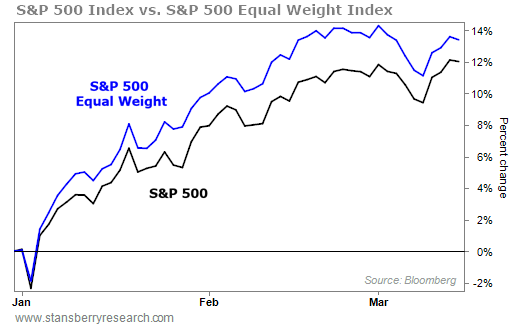 That might not seem like a big deal at first. But it tells us that it isn’t the big stocks driving the market – it’s actually the smaller companies making the biggest difference. And even more important, it shows that lots of companies are rising. That’s a sign of a healthy market. Historically, the Equal Weight Index has peaked before the overall market. It tells us ahead of time if a market rally is unsustainable. But that’s not happening now.

So while most would find it hard to believe, the overall market is actually healthier today than it was in January.

The major rally we’ve seen is happening the right way… with lots of companies moving higher. And that tells me that we want to stay long U.S. stocks.

More in The Melt Up Event