Warren Buffett’s investing insights are some of the most valuable in the industry.

In fact, just this past weekend 40,000 plus people flocked to Omaha, Nebraska for the sole purpose of hearing these insights firsthand.

We shared a few in Monday’s alert.

In lieu of this, I thought I would use today’s essay to revisit Mr. Buffett’s #1 rule for investing, which as you’ll see is one that may investors could well use repeating in the current market environment…

Whether you’re already retired or still building your nest egg — reports that the economy grew by 3.2% should be welcome news. Yet 36.5 million Americans face a retirement crisis on a scale we’ve never seen before. On May 21st at 8 p.m. Eastern, you’ll hear what you can do right now to make the most of “Trump’s Economy”… and why there’s no time to waste if you’re uneasy about your retirement.

And while I’m at it, I might as throw in Mr. Buffett’s second rule for investing as well…

Buffett’s bottom line is that it is far more important to avoid losses than it is to generate gains.

That makes sense given that one big loss can ruin years of good investing.

These days, keeping in mind Mr. Buffett’s top two rules for investing is especially important for investors looking at a particular group of stocks.

This group of stocks brings with them a very high risk of losing a significant amount of money.

You may have guessed that I’m referring to the venture capital-backed companies that have recently been taken public through initial public offerings (IPOs).

Today, I bring you a warning to steer clear of these newly public companies.

It’s because the Silicon Valley VCs who have built these companies have forgotten that the main of objective of running a business is to actually make money!

I have the data that proves it.

In 2018, the percentage of venture capital-backed IPOs that were actually profitable businesses was only 16 percent — a level not seen since the Dot.com mania of 2000. 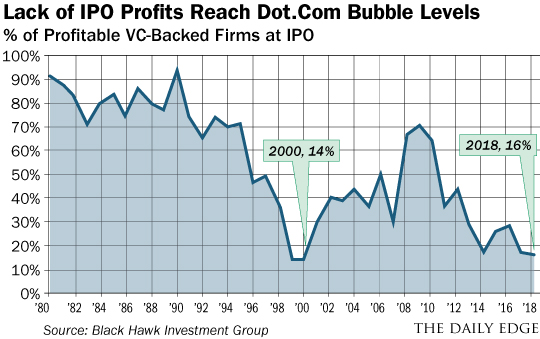 This should ring some alarm bells for you.

Seeing IPO profitability levels dip to Dot.com-era levels is not a subtle warning sign. During this craze, there were regular IPOs of companies that not only weren’t profitable, but didn’t even have a business plan!

All you had to do back then was form a company with “.com” in the name and investors would throw money at you.

Investors in these companies lost their shirts.

But twenty years have now passed since the Dot.com crash and burn, so I suppose it makes sense that lessons learned then are now being forgotten.

Her, we want to make sure that you keep that important lesson front and center today when it is very much needed.

Do Not Touch – These Companies are Gambles, Not Investments

Venture capitalists have forgotten that the objective of a business is to make money.

Today they have one goal: Get big fast… and then worry about profitability later.

For every company where this strategy works, there are going to be exponentially more that fail. Putting your money into profitless dream stocks like this isn’t investing — it’s gambling!

A person who thinks that he can pick the one winner out of many failures is likely significantly overestimating their abilities.

Plus, don’t forget that huge tech winners — like Google, Facebook and Alibaba — were all profitable prior to their IPO. Even Amazon has generated positive cash flow almost every year despite fitting the “get big fast” stereotype.

The well-known recent and imminent tech IPOs are nowhere near being profitable.

Uber Technologies (UBER) — This tech giant is expected to officially start trading publicly tomorrow with the IPO stock price expected to be near $50 per share, valuing the company at nearly $90 billion.

That is a $90 billion valuation for a company that has lost $4 billion over the past two years. In the company’s IPO disclosure document there is an official warning that the business may never become profitable.

Lyft Inc (LYFT) – Lyft started trading in March of this year near $80 per share but the stock has since collapsed to $55 today. At $55 per share, the market is valuing the business at $16 billion.

Does that make it a bargain?

Hardly. For 2019, Lyft has guided that it will lose $1.2 billion on just $3.3 billion in revenue.1 That’s impressive, I wonder how much Lyft could lose if it generated $5 billion of revenue?

Snap Inc (SNAP) – For the first quarter of 2019, Snap has guided that the business hopes to lose $160 million which on an annualized basis would be a loss of $640 million.

For that performance, investors are willing to pay $11 for Snap shares, thereby valuing the company at $15 billion.

The objective for all these profitless new IPOs is that they will grow so much that they eventually make money.

Snap’s first quarter 2018 user count was 191 million and by the fourth quarter it was down to 188 million!2 I wouldn’t touch any of the three companies above with a ten-foot pole.

And investors should be wary of not just these three, but also the other recent tech IPOs that don’t view profitability as an objective.

The market moves in cycles and today we are at the stage in the cycle where IPO mania has returned.

The IPO market started strong and could soon take off

The IPO market is off to an exceptionally strong start, after a two-month hiatus around the government shutdown. According to...