U.S. stock index futures sank on Tuesday after President Donald Trump suggested he may want to delay a trade deal with China until after the 2020 presidential election.

At 8:52 a.m. ET, Dow Jones Industrial Average futures indicated a drop of 244 points at the open, after trading slightly higher earlier in the session. Futures on the S&P 500 and Nasdaq also indicated sharp losses at the open.

“In some ways, I like the idea of waiting until after the election for the China deal, but they want to make a deal now and we will see whether or not the deal is going to be right,” Trump told reporters earlier on Tuesday. When asked if he had a deal deadline, he added: “I have no deadline, no … In some ways, I think it is better to wait until after the election if you want to know the truth.” 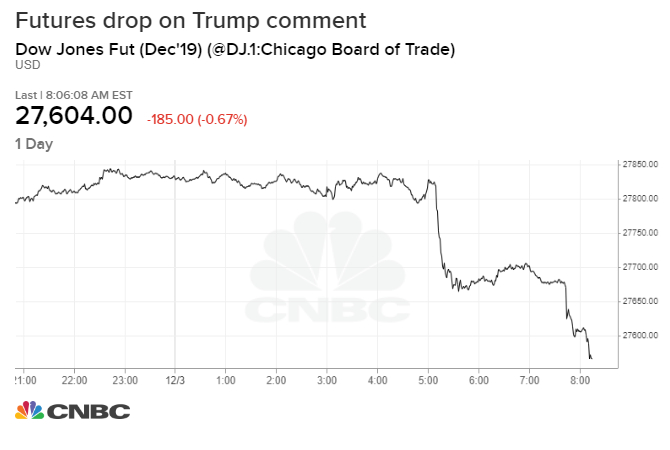 The two nations have been haggling over a “phase one” trade deal over the past several weeks, an effort seen by many investors as an attempt at a sort-of truce until the globe’s two largest economies can agree on a longer-term relationship. Both sides have introduced tariffs on billions of dollars’ worth of imports as the disagreement escalated over the last year; additional U.S. tariffs are set to take effect on Dec. 15.

“Today’s session will hinge on the market’s interpretation of Trump’s overnight comments which concluded he has no deadline for a trade deal with China,” wrote Ian Lyngen, head of U.S. rate strategy at BMO Capital Markets.

However, that doesn’t seem to be how investors are interpreting the president’s comments, Lyngen added.

“There are several potential reads of these remarks; the first of which would simply be to take them at face value and assume the trade war will be a semi-permanent facet of global commerce throughout next year,” Lyngen added. “There is also the very real probability he’s simply raising the stakes as a negotiating tactic.”

If stock and bonds traders took Trump’s remarks as anything more than a negotiating tool, the losses in risk markets and the bid for safe-haven assets like Treasurys would also be more extreme, he wrote.

The French tax imposes a 3% tax on revenues tech companies generate in France, including targeted advertising and digital marketplaces. In response, the White House on Monday said it could impose duties of up to 100% on $2.4 billion in imports of French champagne, cheese and other luxury goods.

“Look, I’m not in love with those companies — Facebook and Google and all of them, Twitter. Though I guess I do well with Twitter,” Trump said from London. “But they’re our companies, they’re American companies. I want to tax those companies. They’re not going to be taxed by France.”

Tuesday’s losses would add to a steep decline from the previous session. The S&P 500 dropped 0.9% on Monday, its worst one-day performance since Oct. 8, while the Dow lost nearly 270 points. The Nasdaq closed down 1% on Monday. The previous session’s pullback was sparked by disappointing manufacturing data as well as renewed trade uncertainty between the U.S. and two South American partners.

Trump announced Monday the U.S. will restore steel and aluminum tariffs on imports from Brazil and Argentina. He also suggested the move was necessary because Brazil and Argentina had been “presiding over a massive devaluation of their currencies.” However, in recent months, both countries have been seeking to strengthen their respective currencies against the dollar.

On the data front, the latest quarterly financial report will be released at 10 a.m. ET, with light vehicle sales figures for November set to follow slightly later in the session.

Market will give Fed a ‘punch to the mouth’ in 2020, a top market analyst says

That’s according to Jim Bianco, president of Bianco Research, who says the recent market narrative reminds him of the former...