Total sales in the latest period fell short of analysts’ expectations. But Walmart raised its annual earnings outlook ahead of the holiday season.

Its shares jumped more than 3.5% in premarket trading on the news.

A TEEKA TIWARI EXCLUSIVE: Inside A Money-Making System Like No Other 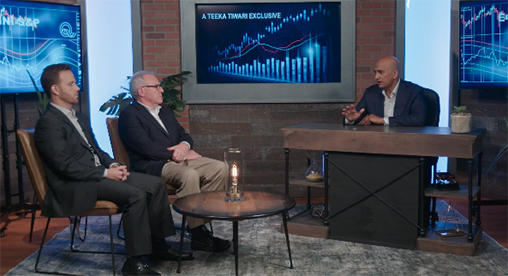 Last night, for the first time ever, Teeka Tiwari has revealed a remarkably accurate new trading system that has been credited with calling almost every major market move for the past two decades.

Now, Teeka’s going to show you not only how you can use this system to see an extra $12,000 a month – he’s also going to use it to show you exactly what’s going to happen to the price of gold over the next six months…

So you can buy at the low and make a fortune.

Here’s what Walmart reported for its fiscal third quarter compared with what analysts were expecting, based on Refinitiv data:

Sales online and at Walmart stores operating for at least 12 months in the U.S. were up 3.2%, topping estimates for growth of 3.1%.

“We continue to see good traffic in our stores,” McMillon said. “We’re growing market share in key food and consumables categories, including fresh.”

Walmart said the average ticket in the U.S. grew 1.9% compared with a 1.8% increase a year ago. Transactions were up 1.3% in the latest quarter, slightly lower than growth of 1.6% this time last year.

Looking to the full year, Walmart now expects adjusted earnings per share for fiscal 2020 to “increase slightly” compared with last year. Previously, it was calling for adjusted earnings per share to range between a slight decrease to a slight increase. Analysts have been calling for 0.3% growth. Excluding Flipkart, Walmart says annual earnings should be up a high single-digit percentage.

The company added it “continues to assess the ongoing civil unrest in Chile and has not included any related potential discrete financial effects in its assumptions.”

All year long, Walmart and Amazon have been neck and neck in a delivery war, trying to offer shoppers as speedy a service as possible.

Amazon announced plans in October to start delivering grocery products for free within a two-hour window to all Prime members living in the 2,000 regions eligible for the service. Until then, Prime members had to pay an additional $14.99 per month to get access to Amazon Fresh, a separate program that offered two-hour grocery delivery.

Walmart has started testing delivering groceries directly to customers’ refrigerators in three cities. Its InHome grocery delivery membership program costs $19.95 a month. And making the most of its bricks-and-mortar stores, it has more than 2,700 grocery pickup locations for online orders across the U.S. Walmart also now offers a “Delivery Unlimited” option from 1,400 locations, where customers can pay $98 annually, or $12.95 monthly, for unlimited grocery delivery.

Walmart shares are up nearly 30% this year. The retailer has a market cap of about $344.2 billion, compared with Amazon’s $867 billion.

Google will offer checking accounts next year, according to a source familiar with the company’s plans, representing big tech’s boldest move...